When you mix these two dog breeds together, you get a little bit of the traits and characteristics of both dog breeds. The German Shepherd Golden Retriever Mix is bred by breeders that try their best to find out the best parts or “pros” in each of the two canines.

They then breed for these positive points, as well as try their best to find out the “cons” in each of the two dogs and try to avoid breeding for those characteristics and traits.

As of this writing, the German Shepherd Golden Retriever Mix isn’t technically recognized as an official mix breed, it is however recognized as a designer mixed-breed by the following entities.

What do you call a German Shepherd Golden Retriever Mix?

There are several names associated with this cross breed which are listed below.

When we say large you may be asking so exactly how big will a German shepherd golden retriever mix get?

The Golden Retriever German Shepherd mix will typically be anywhere from 20-25 inches tall in height and weigh anywhere from 60-80 lbs on average.

For arguments sake you will see some variation on the height and weight used for classifying a dogs size.

Generally experts will care more about how much they weigh when determining size as each breed has different physical traits. For example bulldogs are naturally shorter but considered a medium size dog due to their weight.

Some dog breeds will be taller but lighter and some will be shorter and heavier so may not meet the “guidelines” above exactly. When this is the case default to the weight.

One thing is clear the Golden Retriever German Shepherd mix clearly meets the guideline for a large dog by weight and also typically by height.

The German Shepherd mixed with a Golden Retriever yields a cross breed’s coat that is fairly long, very much like that of its Golden Retriever parent, meaning you’re going to have to deal with a little bit of excess shedding here and there.

The most common colors that this canine’s coat comes in are black, cream, yellow, tan, white, golden and blue.

A very common coat color they tend to come in is a coat dominated by the color black or dark brown having a little gold color to it as well.

As we always point out whenever we discuss a mixed-breed dog, you can never determine what the exact temperament of a mixed-breed is going to be like. This is because of the simple fact that mixed-breed dogs aren’t always equally bred among two parents in terms of percentages, oftentimes the dog is bred more from one parent than the other.

With that said, there are certain temperament traits that all Golden Shepherds share, no matter what parent they were bred to most.

The Golden Retriever German Shepherd mix makes the perfect family pet. They are smart & active dogs which are trainable and have great personalities.

So just know that this canine is happiest when its among the people it loves, and it at its most miserable state when left alone with no company to enjoy.

They love to play with young kids that are as energetic and full of life as they are, as well as other household pets you may have at home that they will most certainly make immediate friends with.

The Golden Shepherd is highly active and loves to play in outside spaces, just like its Golden Retriever parent, especially when it comes to playing around and having fun with young children and other household pets.

If you want to see the Golden Retriever German Shepherd mix at its happiest, play some games with them such as fetch or Frisbee or get some exercise with them by doing activities such as going on a walk, jogging, running, swimming, hiking, or whatever else you’d like to do.

The point is, go outside and be active with them in order to see them at their happiest, most healthy mental state. Speaking of swimming, they (just like its Golden Retriever parent) absolutely LOVE to swim. Additionally it is a great form of exercise for your puppy.

This is a very positive thing because, besides swimming being an excellent form of exercise and physical activity for them to get, this is also a way of bathing them (or them bathing themselves).

So if you’ve got a pool as part of your property or have easy and fast access to one nearby, then know for a fact that this could very well make your German Shepherd Golden Retriever mix as happy as can be.

At a bare minimum, you should give your Golden Shepherd physical activity opportunities for at least 60-90 minutes each and every single day.

If you’ve got something like a large backyard at home, then all the better because they can play around and be active by themselves over there when you don’t really feel like going outside the house to exercise them.

If you live in a small-spaced property like an apartment with no backyard in it, then this canine is going to have a real hard time adapting and fitting in.

You could possibly get by if you give them enough time outdoors to play around and get some exercise, but this isn’t always the case with a dog as large as this one.

This dog is one of the most intelligent canines out there, just like both its parents the Golden Retriever and the German Shepherd. This means that they won’t give you such a hard time in training, and will be able to grasp what you’re trying to teach them real fast.

Not only that, but this dog thrives on being a good boy/girl during training and doing exactly what’s asked of them, which they know will make you happy.

As long as you stick to the correct principles of dog training, such as positive reinforcement, establishing yourself as the firm leader, abstaining from scolding/spanking/physical harm and remaining consistent throughout it all, you’ll be more than fine and you’ll find that training this canine is actually a joy.

Just like every other breed out there, the earlier you train and socialize them, the better the results and the easier it will all be.

If your mix takes up on this characteristic from its German Shepherd parent, then you can bet that it’s going to grow up to be an amazing guard dog that will do all it can to protect you and your family members.

However, if they take up on this characteristic from its Golden Retriever parent, then let’s just say that you should forget about all of this. 🙂

Besides being an excellent companion dog, this dog is also very well known to be an excellent working dog, being able to perform tasks such as search and rescue.

German Shepherds were used as herding dogs and today for all kinds of work and are well know as police & army dogs because of their loyalty, intelligence and work ethic.

Golden Retrievers were originally bred as a hunting dog and are still commonly used for this even today.

The most common health problems that they are prone to suffer from are: Before you buy any Golden Shepherd puppies from any breeder, you should ask them to show you the veterinary records that the puppy has, as this will go a long way in confirming whether or not they suffer from specific health problems.

This will also go a long way in confirming whether or not their parents used to suffer from any health problems which they could only pass on to their offspring(s) as well.

This cross breed has an expected lifespan of around 10-14 years, which is excellent considering that such large sized dogs don’t generally go on to live such lengthy lifetimes.

What you feed your Golden Retriever German Shepherd mix is very important to helping them have a long and healthy life. When looking for dog foods look for foods that don’t have fillers and are free from ingredients like artificial coloring, flavors, sweeteners and harmful preservatives.

The top choices we came up for the parent breeds take into consideration some of the health issues that Golden Retrievers & German Shepherds are prone to suffer from.

See our list of recommended dog foods for Golden Retrievers.

How to Care for a Mixed Breed Dog

Each mixed breed including the Golden Retriever German Shepherd mix requires different care depending on the characteristics of their parents that were passed down to their offspring.

In this case we look specifically at the Golden Retriever mixed with German Shepherd to see which traits were genetically passed down to their offspring to understand how to best care for them. Often there will be some general traits passed down along with the potential for individually unique traits.

As we established in an earlier section in this article, with a Golden Retriever cross German Shepherd mix they will be a fairly heavy shedder with a longer-than-average coat length.

This means that besides having to brush their coat multiple times on a daily basis.

Of course, the more consistent you are in taking care of their coats on a daily basis means they won’t leave as much hair around everywhere, but you’ll be needing a vacuum cleaner either way as there’s no running away from this issue no matter how much you take care of their hair.

The Golden Retriever German Shepherd mix has one of the most beautiful coats out there, coming from parents that have very beautiful coats each as well so this comes as no surprise.

The Golden Retriever German Shepherd mix will need greater care for their coats in order to keep them in healthy shape.

Here are some helpful tips on how to brush your dog’s hair in the most effective way! 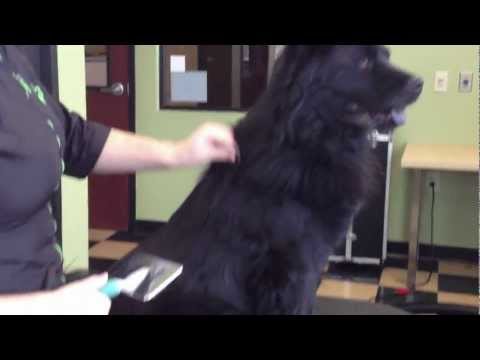 As for bathing this dog and brushing their teeth, you only need to give them a shower when the need arises and brush their teeth once a day (ideally).

Other grooming practices that we prefer you leave to a professional groomer to take care of are ear cleaning and nail trimming, both of which should be done on a frequent basis in order to avoid ear infections and nails growing way too long where they start to become problematic.

What is the best breed to mix with a German shepherd?

The best breed to mix with a German Shepherd depends on what you need & want in your dog. A better way to approach this question is what are looking for in your dog and this might help you determine which mix would be the best for you.

How Much Is A Golden Retriever German Shepherd Mix?

The average price for a new Golden Shepherd puppy on average will be in the range of $400 to $800.  For high end breeders you should expect a higher cost and the potential of being put on a waiting list.

For a quality breeder near me I have seen prices up to $2500 for a new puppy with limited availability with the potential to be put on a waiting list for another litter down the road.

Pros And Cons Of Getting A German Shepherd Golden Retriever Mix

There are always pros and cons to any decision and it is no different when deciding if you should get a German Shepherd Golden Retriever.

In summary we hope this guide will help you choose the perfect puppy breed for your needs. Some cross breeds might be perfect for one person and not the best fit for another.

We hope this helps you understand better if this breed is a good fit for your next loving puppy. Good luck on finding and taking care of you next best friend.